How To Run Faster & Stay Injury Free. By David Griffin

Everyone has different running biomechanics and I have realised over the years of training and competing in athletics myself, as well as training others, that it is very difficult to completely change a runner’s biomechanics. However, subtle changes in a warm up and strength routine can significantly enhance performance and prevent injury. For example, a common running injury is ‘runner’s knee’ – A pain/weakness in the knee making it very difficult to run. One of the causes of runner’s knee is tension in the IT band. Many runners do not bother mobilising this ‘fascia’ that runs on the outside of the leg from the knee to the hip. It is a particularly hard area to stretch and is often associated with sharp pain when mobilising it, often causing athletes to miss this area out of their routine completely. However, just by using a foam roller and acupuncture, tension in the IT band can be reduced, causing less strain on the knee. In this article I will go through the main areas to improve running biomechanics, preventing injury and improving your running performance.

Here at ESPA Life, we perform an in depth 90 minute consultation and exercise screening assessment. From a performance point of view, it is essential to assess a person’s biomechanics from the start to iron out any major issues and correct them. Equally, this is important to prevent injury, so we use a functional movement screen and a range of flexibility exercises to assess the person’s range of motions, muscular strengths and weakness, as well as any other imbalances they may have.

The ankles are one of the major movement joints in the running action but they are often overlooked. It’s amazing, particularly in dorsiflexion, the limited amount of movement there is at the ankle joint amongst even high level runners. Mobilising the ankles not just in a frontal plane but also a lateral plane is particularly important for many reasons. For a start the ankle is the base joint of the body when running. Any issues at the base are going to be exacerbated higher up the body. Limited ankle mobility also can put strain on the achilles tendon, soleus peroneals and gastrocnemius muscles of the lower leg, causing tendonitis, muscle cramps and tears. Plantar Fasciitis, a sharp pain underneath the foot caused by a collapsed heel arch, is also associated with poor mobility in the ankle.

The problems may not occur straight away but with many running injuries, it is the chronic (repetitive pounding) injuries that often end a runners career. At Espa Life, we therefore include a range of ankle mobility tests to increase range of motion at this joint during dorsi flexion, plantar Flexion, inversion and eversion.

The knee joint, despite providing flexion and extension, primarily requires stabilisation at the joint. My important concern when analysing the knee joint is not always looking at the knee itself, but the areas around the knee including ankle and hip mobility and the strength of the surrounding muscles. It is also important to regular get feedback from runners on how the knees are feeling, particularly during road running where there is a lot of pounding involved. To prevent this I try and get runners to run on grass as much as possible, as oppose to the track or road. I also like runners doing uni-lateral movement exercises, such as lunges, single leg dead lifts and split squats. During the running action both feet are never in a standard ‘squat’ position, they are split either on one leg in contact with the ground or both completely off the ground. By combining single leg exercises in a program with split stance exercises, a runner will be gaining stability as well as strength. The foam roller is also a great way to provide myofascial release in the legs before exercise.

Hip mobility is so important for a runner. At Espa Life we analyse the hip through many different ranges of motion (flexion, extension, medial and lateral rotation). Stride length restrictions are often caused by tight ilipsoas muscles. Many people have lower back problems during running as well which is often caused by the hip flexors pulling on the lumbar spine, where they are attached. I would always recommend stretching these before and after running and also introducing dynamic movements before exercise, such as lateral lunges and hip mobility drills. Working on the adductors and abductors is also important to prevent any unwanted hip medial and lateral rotation during running. Here I have included a couple of photos of me doing some hip flexor mobilisations. It is often the case that people work on strengthening these areas as well when they do not need to. Often strengthening the abductors and adductors tightens the muscles, particularly if they are not performed at a full range of movement. So aim to get this mobilised first before introducing any hip strengthening exercises.

The rectus abdominis (Abs) is not designed to flex or extend the spine, but to support the spine by resisting any unwanted outside movements, including flexion, extension and rotation of the spine. So when people talk about ‘Core Stability’ and start doing sit ups they are going against the purpose of stability (resisting an outside force). Here at Espa Life we perform a number of stability exercises that protect the spine and work the core muscles the way they were designed to be worked. In running the perfect technique would be a neutral spine position (same as if you were sitting upright in a chair looking straight ahead) with no unwanted movement. If you watch an elite runner run, you will see that above the hip there is no other movement. Their trunk is perfectly ‘still’ and all effort is going forward. With amateur runners you will see all kinds of flexions and rotations of the spine and head movements, caused by a lack of stability in the trunk and tightness.

Often is the case with runners, is that they are hamstring dominant and have an anterior tilt of the pelvis and subsequent low knee lift during running. This is primarily caused by tightness of the hip flexors and hamstrings, but also a lack of glute activation. Utilising the glutes: a powerful muscle, is very important in the biomechanics of running. Hip Lift variations are particular useful and also the kettlebell Swing (see picture below) is a great way to get the glutes firing. The most important thing to realise during these movement patterns is that they are ‘hip dominant’ movements not ‘knee dominant’. Therefore flexing the knee should be limited and hip flexion/extension should be encouraged. But remember keep the spine neutral.

Now, let’s put it into action… 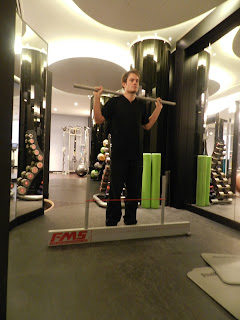 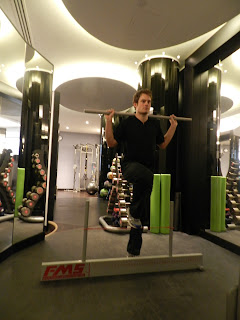 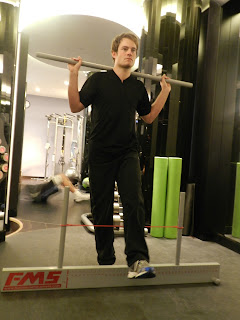 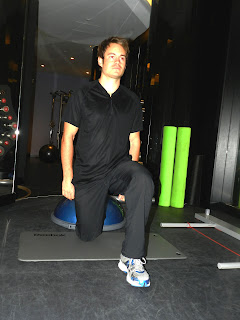 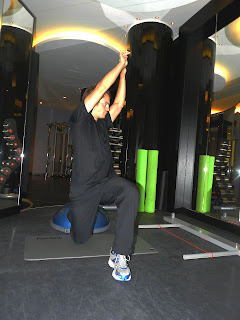 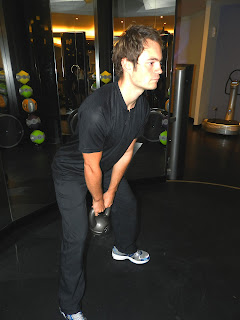 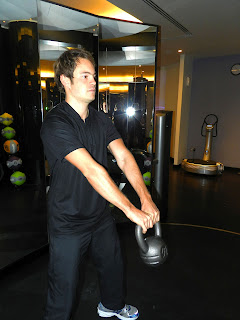 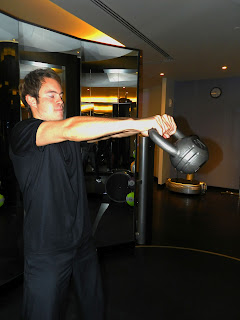 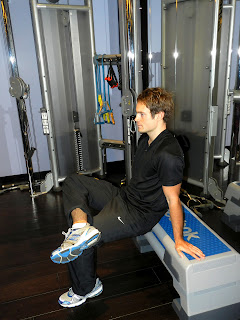 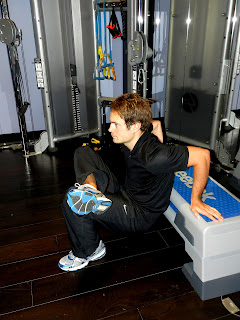